President Donald Trump has said he will halt applications of foreign nationals seeking permanent residence in the US because of the coronavirus crisis.

No Immigration for 60 Days in US

Late on Tuesday, the World Health Organisation reported that all existing data suggested that the novel coronavirus emerged in animals in China late last year and was not engineered or produced in a laboratory.

Trump said he would be placing a 60-day pause on the issuance of green cards in an effort to limit competition for jobs in a US economy wrecked by the coronavirus. The order would include “certain exemptions,” he said, but he declined to outline them, noting the order was still being crafted.

What did President Trump say?

More than 20 million Americans have lost their jobs amid the coronavirus outbreak, and the president said the government had a “solemn duty” to ensure they regain their jobs.

“It would be wrong and unjust for Americans laid off by the virus to be replaced with new immigrant labour flown in from abroad,” he said, adding that there could be some exemptions to the measure.

The US has the highest number of confirmed cases of coronavirus in the world – more than 820,000 – according to Johns Hopkins University, which is tracking the disease globally. 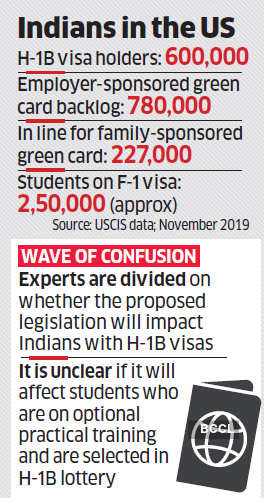 What are green cards?